Today was fun! When you meet up with a family member that you’ve found through your family history research it is a wonderful feeling.

We have spent the day with Lisa who we found through Ancestry DNA & we have worked out that David & Lisa are fifth cousins descended from Wachmans in Lithuania 🇱🇹. Apparently she takes after her Mum butte we could see a definite resemblance between David, his Dad & Stefan in the photos of Lisa’s male ancestors.

Lisa lives with her husband & 3 kids in Redwood City about 30 minutes from San Francisco. She is a published author of fiction & I can’t wait to read her books. She also teaches writing. She writes under the name Elizabeth Percer. She is lovely & we got along really well & shared family tales & information. Her father has written an amazing book of their family for the family & I wished we had time to read it from cover to cover.

Lisa took us to a great Greek restaurant, Kokkari, in the financial district & we really enjoyed the food & the company. Hopefully she will come to Brisbane some time soon.

Our legs had a rest today & were very thankful for it. We were planning on boarding our ship at midday tomorrow but we’ve been notified that it was diverted out to see by U.S. naval exercises & so won’t dock until 2pm which is a bit disappointing. We are quite ready to be spoilt after all the walking we have done. We will enjoy playing in SF for one more day. We’ve really loved our time here. 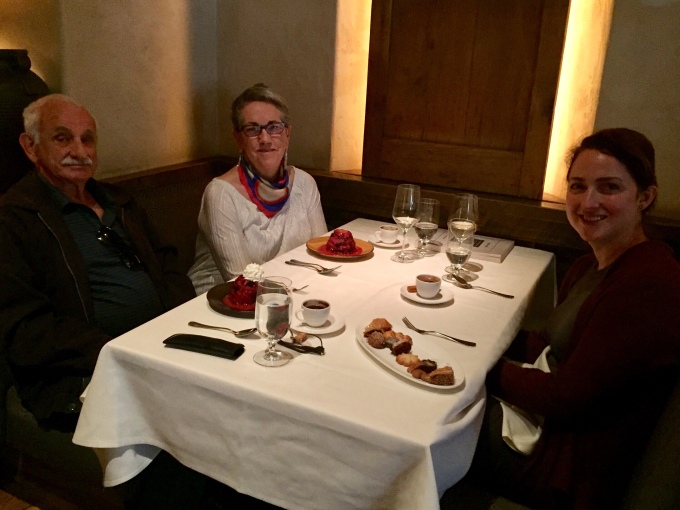 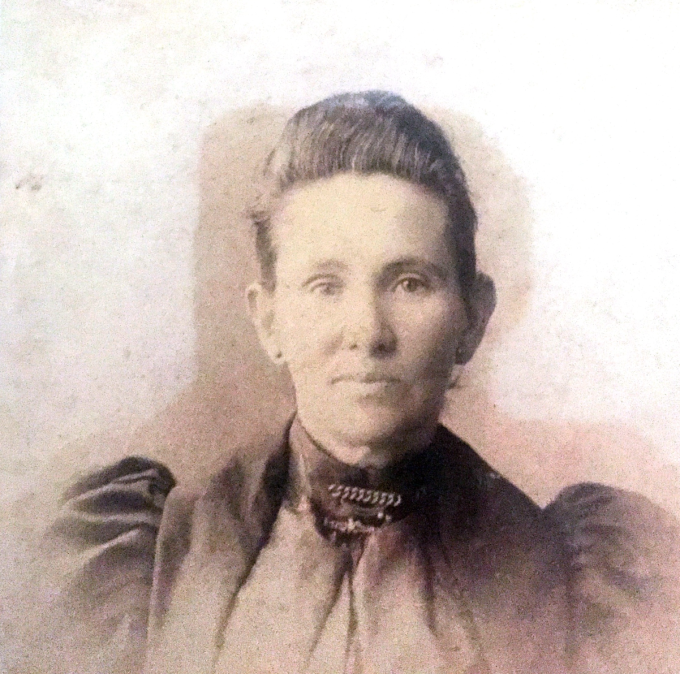 It’s a mystery I’ve been pondering for a while & I’d just love to find the missing links. Perhaps you can help me?

Let me tell you about them – I know that two of the families are connected to my husband, David EDELMAN. The first is descended from his great grandmother, Tsipe WACHMAN, or as she became known in Australia, Sophia EDELMAN and this is his direct family line.

The second I found through David’s Ancestry DNA test. This revealed a link to Liza Percer showing a moderate link of being a 5th to 8th cousin. Liza lives near San Francisco in the USA and we are really looking forward to meeting her and her family next May when we visit there.

Photos show that there is a definite family resemblance between Sophia and Shmuel WACHMAN, Liza’s grandfather.

We have found mentions in both of their histories to Resenai, Lithuania although finding information is very difficult. A couple of years ago we hired a researcher in Riga to see what he could find of the EDELMAN and WACHMAN families in Latvia/ Lithuania and the only record he could find was an 1879 census record which could be Louis and Tsipe living in Resenai in Krazia.

Shmuel WACHMAN left Lithuania for Jerusalem in the 1920s, when he was a young man (we’re not sure of his exact birth year, but think it was around 1900). He met his future wife, Shayna SAKS there, and they married and had all their children there. In 1939, Shmuel took the oldest, Yehuda, to New York, and Liza’s grandmother followed about eighteen months later with their other three children: Moshe, Amnon and his twin sister, Dahlia.

Liza’s grandfather’s parents were Moshe WACHMAN and Miriam KANTZIPOVITZ. Moshe was a teacher (melamed) and his father was either Zorach Yehiel WACHMAN or BUCHMAN. Liza is not sure about the surname as her grandfather said he could remember going to a house with the name “BUCHMAN’ on it – another mystery.

Records tell us that Tsipe WACHMAN (David’s great grandmother) was born around 1851 in Memel Germany, the daughter of Sarah and Samuel. She married Louis EDELMAN (Leib) (1845 – 1905) in Viekšniai Lithuania around 1873.

Louis migrated to Australia, arriving, we think, on the CUZCO in 1889 with his two eldest sons, Edward and Albert. Shortly after in 1890 Tsipe came with the rest of the children and they settled firstly in South Australia before moving to Broken Hill in New South Wales. There they became pillars of the Jewish community and Albert was very involved in the establishment of the synagogue in 1910.

Albert and his family moved between Broken Hill and Adelaide but Tsipe’s other children moved to Perth, the capital of Western Australia around 1910 and there they built their lives. Here I can find them interacting with the other Australian WACHMAN family that I am investigating.

The head of this, the third WACHMAN family is Moshe (or Morris or Moses) WACHMAN and his wife is Seina (Seine or Jane) JACKSON. Seina, the daughter of Rachel Leah, was born in Russia around 1871 and Moshe, the child of Avraham, was born in 1865 also in Russia. Somehow they both arrived in Ireland (I’m not sure how) where they were married in Dublin in 1885. I believe there was quite a community of Jews in Dublin at that time. They had three children in Ireland (Abraham, Daniel and Robert) and then migrated to South Africa. Edward Issy, Harry and Saidie Reva were born in Capetown.

I cannot find when Moshe migrated to Australia but come, he did. Seina and the children came on the Afric arriving in South Australia from Capetown in 1905. Also on the ship were her mother, her brother, Harry JACKSON, and other members of the Jackson family. I don’t know where they were between 1905 and 1907 but their son Ernest was born in Broken Hill, New South Wales on 7 May 1907. Betty (Beatrice) was born sometime before 1910 in South Australia.

By 1916, the family are settled in Perth, Western Australia and Moshe lived there until Seina died on 8 March 1927. Sometime later he moved to St Kilda, a suburb of Melbourne Victoria Australia where he died on 23 September 1937 and was buried on 24 September in the Jewish section of Fawkner Cemetery in Melbourne.

The fact that they spent time in Broken Hill where Louis and Tsipe had settled seems to suggest that Mores and Tsipe were closely related. Were they siblings or cousins perhaps? Tsipe had died in 1903 but Louis and the children would still have given them a family connection, very important to the Jewish people looking to find a place to settle.

In Perth, Moshe and his family lived in Mt Lawley, the same suburb where Edward George EDELMAN and his family were living. Digitalised records of Australian newspapers at trove.nla.gov.au provide information showing the WACHMAN and EDELMAN families attending each other weddings, playing cricket together and generally being part of each other’s lives.

I have been unable to find any living Australian descendants of Moshe and Seina even calling the WACHMANS listed in the white pages. So what happened to his children and are there any living descendants?

Abraham married Nellie Elizabeth Eddington LAWSON in 1917 in Sydney, New South Wales. He enlisted in the Australian Imperial Force early in 1918 but by 1923 was living in Bondi, New South Wales and then in 1926 we find them in St Kilda, a suburb of Melbourne. Their son, Ronald John WACHMAN, was born in Bega, New South Wales on 28 November 1917 and their daughter Shirley Joy was born in Mt Lawley Western Australia on 28 January 1928. Abraham died on 20 September 1950 in Bondi and was buried in the Jewish Cemetery, Rookwood, New South Wales. Ronald John WACHMAN married Noleen Dallas PATERSON and lived in various suburbs of Sydney. He died on 23 June 2001.

Robert WACHMAN served in World War I in the 48th Australian Infantry Battalion and was killed in action on 11 April 1917 in France. He is buried at Villers-Bretonneux.

Simon Daniel WACHMAN joined the 44th Battalion Australian Imperial Forces in January 1916 when he was living in Perth Western Australia. Sometime later he moved to St Kilda, Victoria and he died in Caulfield, a neighbouring suburb of Melbourne on 12 November 1955.

Edward WACHMAN married Deborah JONA in the Perth Synagogue on 15 June 1927. He died in Perth and was buried at the Karrakatta Cemetery in Perth on 16 Oct 1959. I can find no record of any children.

Harry WACHMAN married Mina Elezabeth STEVENSON in Waverley New South Wales in 1941. He died on 9 August 1955 in St Kilda Melbourne and was buried on 10 August that year. Again, I can find no record of any children.

Saidie Reva WACHMAN married Leon Arie WHITE in the Synagogue in Perth on 21 October 1926 and they had one daughter, Robin Joy who was born in 1929. Saidie died, aged 28, on 23 August 1932 in Fairfield Victoria and is buried in the Fawkner Cemetery.

About Betty or Beatrice WACHMAN I have very little information except that she went to South Africa as she is mentioned as living there in Simon’s death notice in the paper.

Ernest WACHMAN seems to have lived mainly in Victoria but he did return to Freemantle Western Australia at one stage. He married Nancy Winifred (surname unknown) and they were living together at various Melbourne addresses from 1949 onwards as per the electoral rolls but I cannot find any record of a marriage or children. He served in the military during World War II, signing on in Ripponlea Victoria and he died in 1981 at Sandford Victoria. He was buried at the Springvale Necropolis in Melbourne on 2 November 1981. The inscription on his grave is: “Husband of Win”

So, do any of the descendants of Louis and Tsipe EDELMAN know these WACHMANS? Can I find them and can they give us any leads?

My husband, David, descends from Albert EDELMAN who married Sarah Gordon (daughter of Louis Gordon and Gnesa Krantz) in Broken Hill in 1909. I’m pretty sure that none of Albert’s descendants have any information for me that will help and I’m also sure that the best leads will be from the Perth side of the family.

Roy EDELMAN was never married and had no children as far as I know.

Woolf married Lily Silverman in Perth on 3 May 1923. From other Ancestry trees I can see that they had a daughter, Shirley who married Jack Macklin and together they had two children Janice & William.

Brad EDELMAN is the son of Joseph EDELMAN, another of the sons of Edward George EDELMAN, I am in contact with Brad but he knows nothing of the WACHMAN family either.

To add to the mystery, EDELMAN family anecdotes tell us that Louis EDELMAN had a “reisenbillet”, a special ticket that enabled him to travel between Russia and Ireland as a trader, taking horses to Ireland and returning to Russia with crystal. Could this be true? I can find absolutely nothing that substantiates it but it is interesting, to be sure, to be sure! Another story says that an EDELMAN had to flee from Ireland because he murdered his wife or a barmaid? Again, I can find no proof. All these Irish connections are fascinating though. Louis’ father was Jacob and his mother was Clara JOHNSTON. What could be the Jewish name from which JOHNSTON has originated? Was Clara from Ireland?

So these are my WACHMAN families, descending from Tsipe and two Moshe. Are these links just a series of coincidences or is this one family reunited half way around the world from where they started? I really think it is but I am unable to prove it.

If you do have any information, clues or suggestions for me, please contact me at diedelman@me.com

The Musings of a Writer / Freelance Editor in Training

Sits down with The Two Doctors and .....