We’ve wandered the old Jewish quarters of quite a few European cities and we always find them interesting. Today we did a walking tour with a young man named Emmanuel who grew up in a Jewish Family but is not a practicing Jew. His grandparents managed to escape Paris to America in 1942 because he was a physicist. Emanuel is a film maker & photographer and he personalised the tour by talking about specific people. It was very interesting. 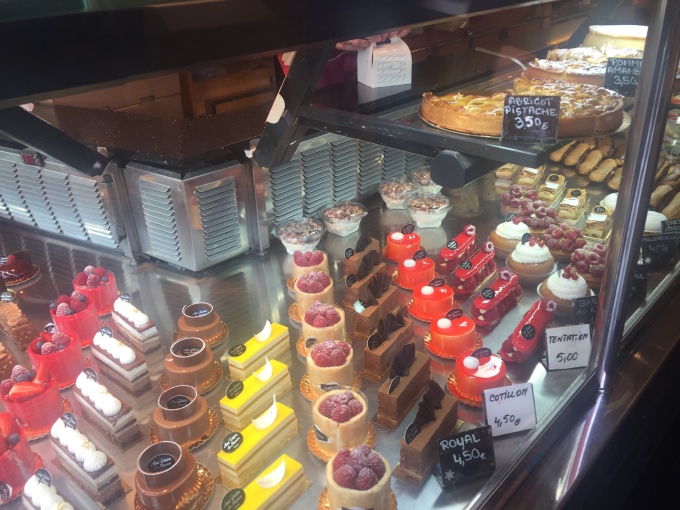 Firstly we noticed the beautiful cakes in the window of the shop where we met. There a family from San Francisco joined us for the tour. We returned to this shop at the end of the tour to catch our metro but, of course, we took home some goodies to have with our cup of tea when we got home.

There are many beautiful old buildings in this area. Originally Dukes & wealthy people lived in them but during the revolution many escaped or were killed, leaving their homes empty and they became neglected and dilapidated making them cheap to rent. Jews migrating from Eastern Europe came to France as it had a policy of freedom of religion and they took up residence here. 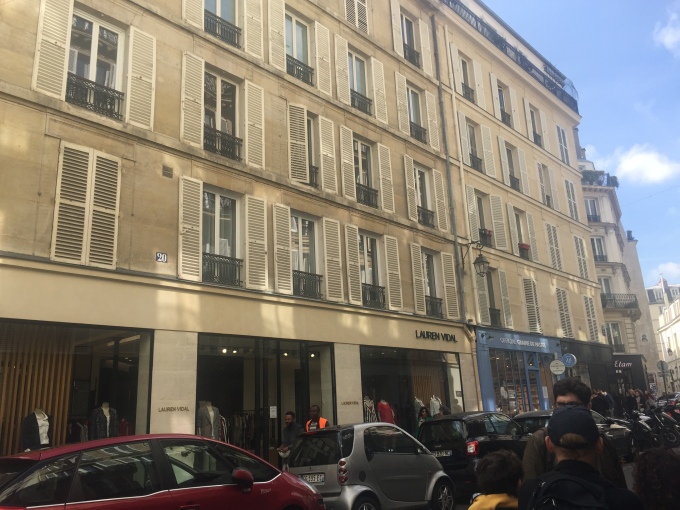 The plaque above is a Memorial to the family who lived in this house in 1942 but were deported and exterminated because they were Jewish.

We were permitted to enter this synagogue which was used by Jewish people during World War II when they were not allowed to worship under the Occupation of the Nazis. It was a secret synagogue and is still used today. A young man was there studying the Torah.

It was lunch time and there were long queues at some shops which all sold kosher food. 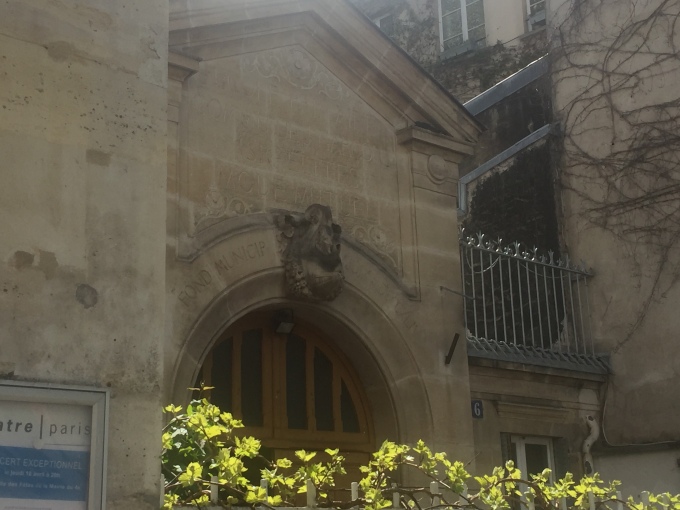 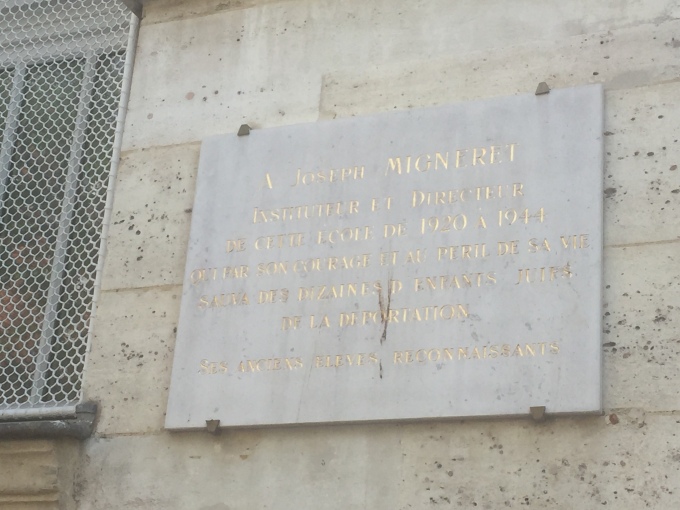 During the occupation this was a Jewish school but the students were not taught any traditional Jewish learnings. One of the teachers was Joseph Migneret who assisted 252 of his pupils to escape from the Nazis and this plaque honours him. I think that number is right but I could be wrong.

The street below had its name changed to honour non Jewish French citizens who assisted Jews to escape the Holocaust and did this without any prospect of payment. As you can see there are many names on the wall of the street which honours them. It is the Street of The Just. 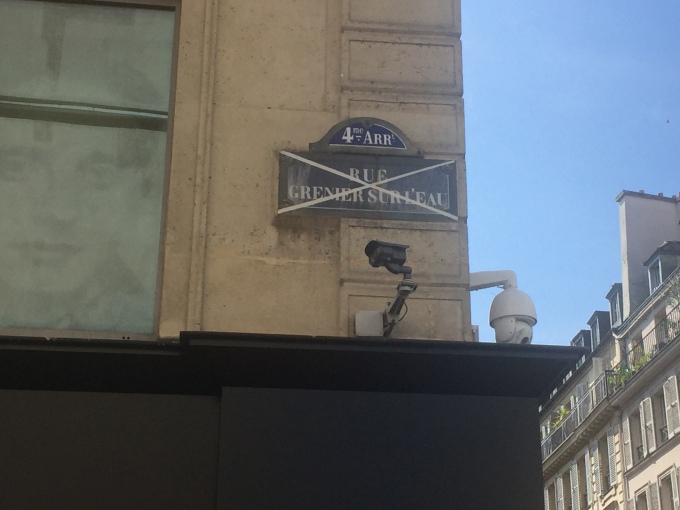 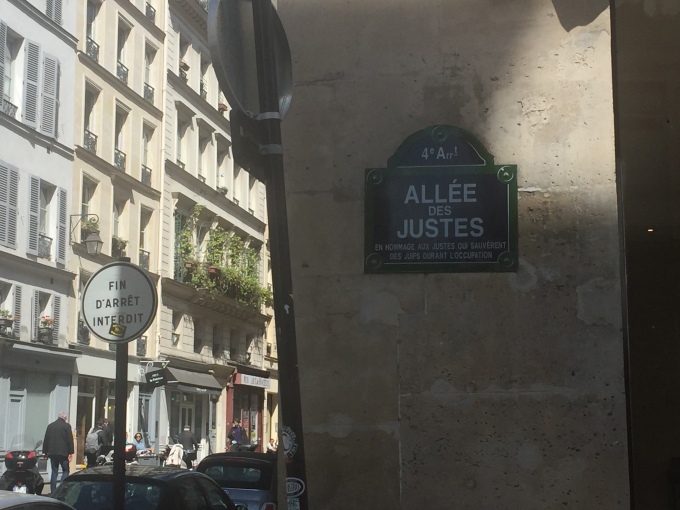 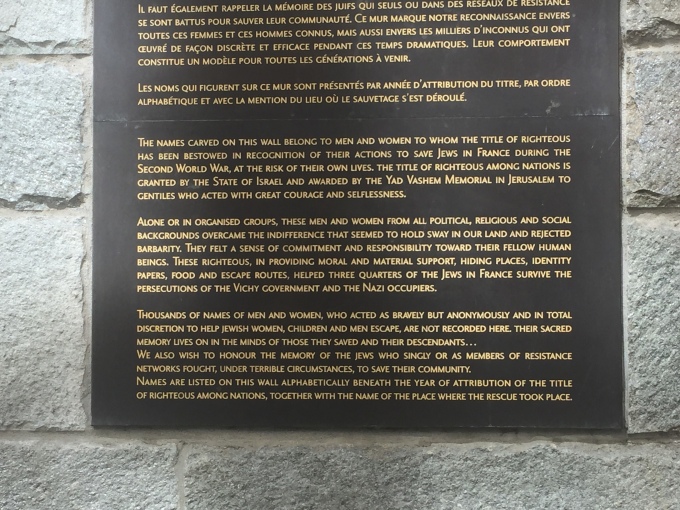 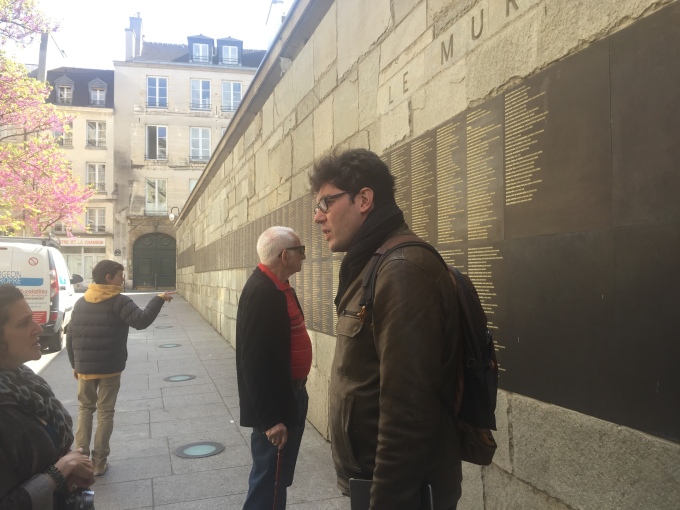 Emmanuel had planned to finish the tour at Notre Dame but all the streets are closed off. I imagine this is to allow investigation of the fire and to begin the clean up and rescue of whatever can be saved. David and I went as close as we could to get the following photo

And I’m very happy to report that I found a very delicious, traditional onion soup and now I feel we can leave Paris happy tomorrow. We’ve been to Giverny to see those spectacular gardens of Monet. We’ve seen his wonderful work in Musée de L’Orangerie and his work as well as that of the other impressionists in the Museé D’Orsay and at the Foundation Louis Vuitton. We’ve had our incredible day in the Somme with Myriam discovering the story of our family members who fought in WWI.

We’ve bought and eaten delicious food from the markets and restaurants. We’ve wandered some interesting streets and laneways. We’ve loved our cute little apartment and tomorrow it is time to move on. Will we ever return to Paris? Who knows. But I can tell you that I love Paris in the Spring time – in fact anytime! 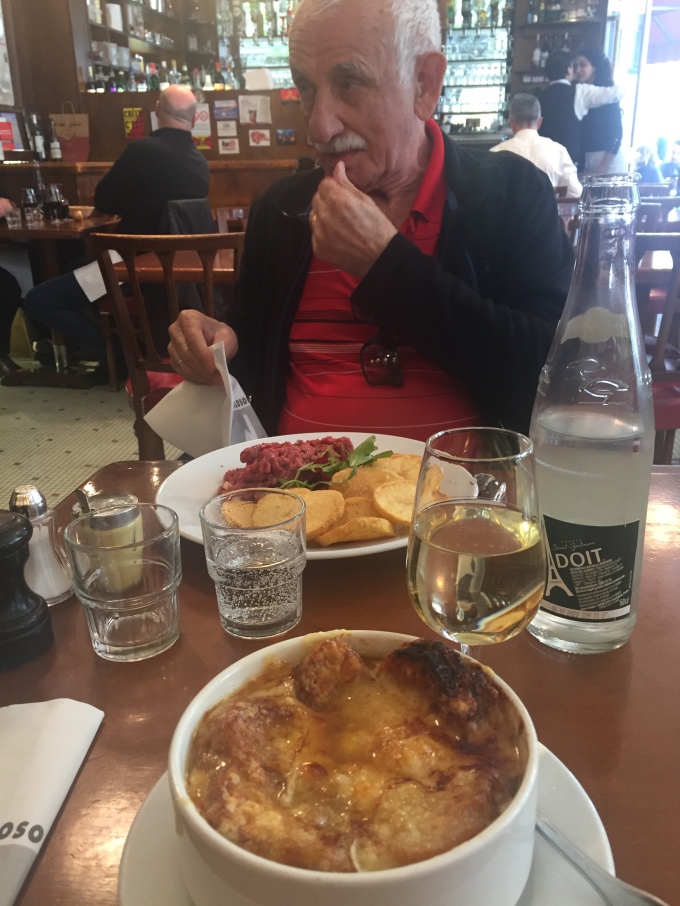 7 thoughts on “The secrets of The Marais, the old Jewish Quarter”

The Musings of a Writer / Freelance Editor in Training

Sits down with The Two Doctors and .....