Last night we went to the Polo Grill, one of the speciality restaurants on board.  There’s no extra charge – it is all included & as we did when we went to the French one, Jacques, the other night, we had a wonderful dinner. David started with giant shrimps, then we both had a tomato & red onion salad, followed by a freshly grilled whole lobster. It was delicious.  My mouth waters again just thinking about it. For dessert David had crème bruleé which he raved about & I had three beautiful marshmallows – one in caramel sauce, one raspberry & one chocolate. All of the food on board is excellent but I think that was our favourite meal so far.

This morning we docked in Riga the capital of Latvia & we met Aleksandrs Feigmanis, Master of History & Doctor of Theology. He is the Jewish genealogist who researched the Edelman family for us & he was our guide for today. He was very interesting & a very pleasant man & he walked us all over the old town. It is a lovely warm (22°) day here in Riga today.

The old town of Riga is UNESCO world heritage protected & has some beautiful old buildings. The town began in 1201 & is bordered by the River Daugava on the west & encircled by a canal on the east.

We saw some beautiful examples of Art Nouveau architecture: 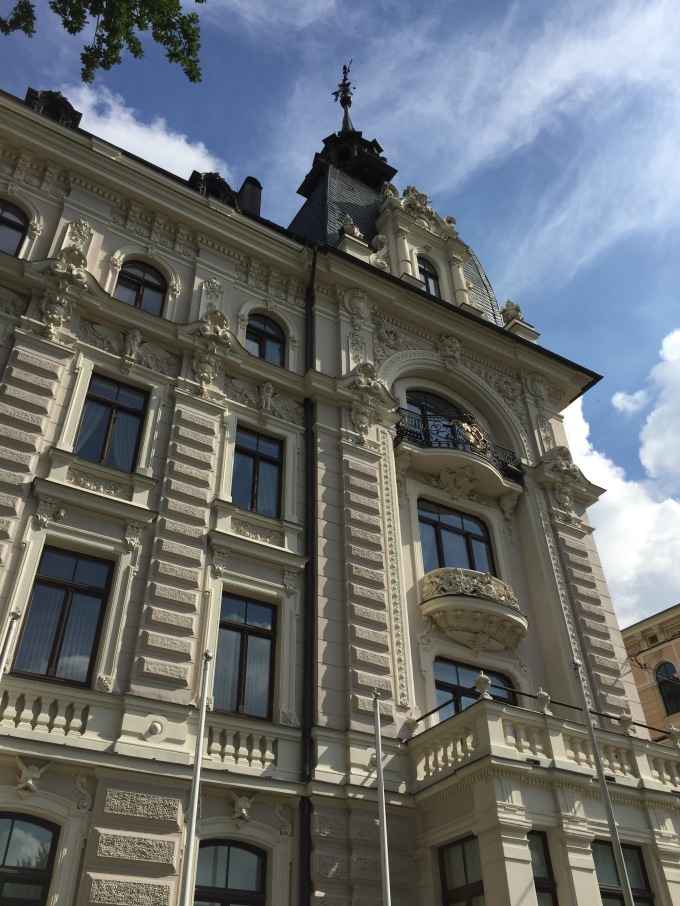 I had no time to be careful with my shots. Aleks was walking very quickly & I had to take them on the run. He told us some much interesting history about the houses – I should have taped him – no way we can remember it all.

We saw the Three Brothers, 3 houses in a row which illustrate the development of housing over the centuries from Medieval to Baroque. I think the first was built in 1642

The white one on the right is the oldest, then the yellow, then the green all about a century apart.
Of course many Jews here were killed during the Nazi years. I think there were 70,000 here before the war & now fewer than 5,000. Synagogues were burnt down. This is a memorial built on the site where the Nazis burnt down a Synagogue where they had the people trapped inside. There are flowers at the memorial because the anniversary of this was on 4th July & they had services. 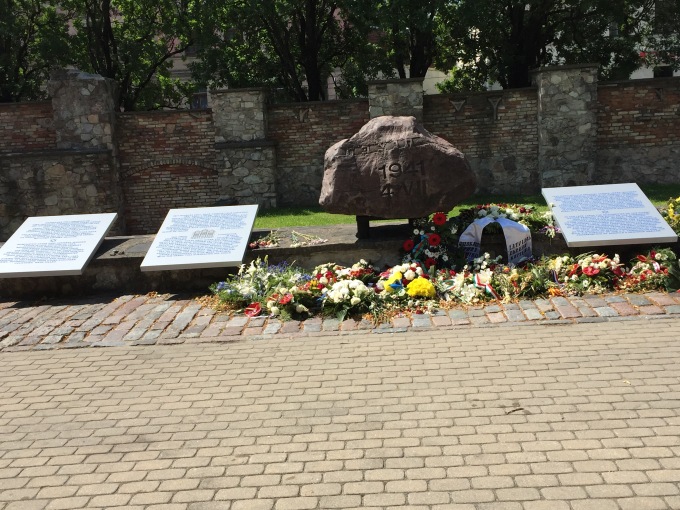 We saw the old Jewish ghetto area where people lived crowded together, more than a family to a room. The houses were wooden & some very poor people still live there.

It is always very sad to hear the history. It is impossible to understand how it could happen.

David’s great grandfather was born somewhere near Riga around 1840 & came to Australia in 1888 with his two eldest sons, one of which was David’s grandfather. They lived in a small shetl (village). Aleks says we should return for at least three days & he will show us.

Would be nice but I don’t think we will make it!

Marla on the Move

adventures of a francophile